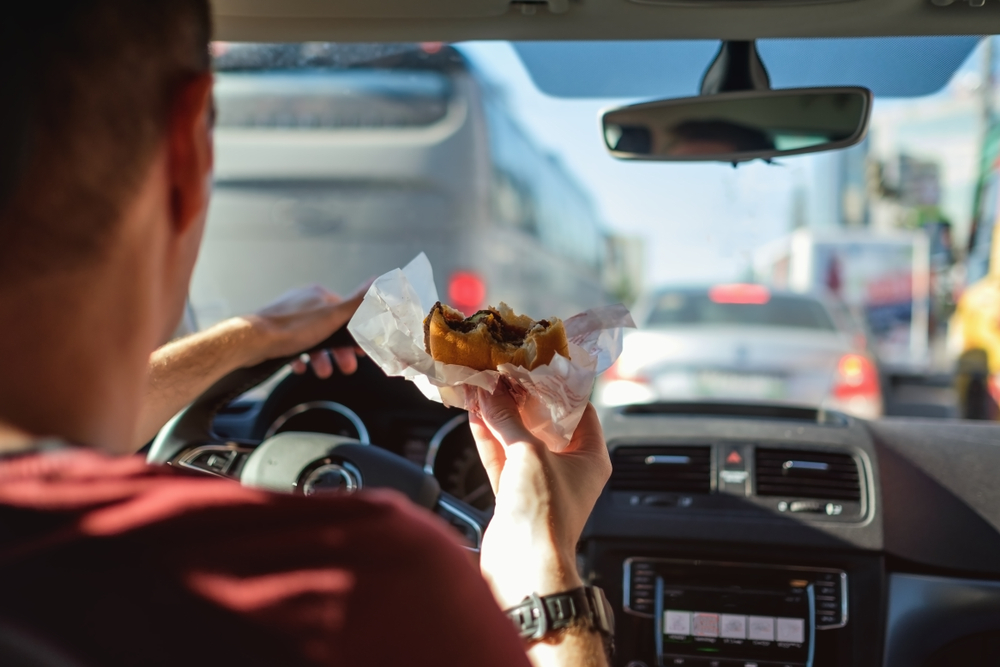 Eating While Driving in California Pt 1

Distracted driving is one of the most problematic things on American roads. In 2016 alone, National Highway Traffic Safety Administration (NHTSA) has reported the occurrence of over 3,400 deaths resulting from this issue. With this disturbing trend taking the country by storm, several state governments have set up strict laws meant to prevent drivers on roads from driving in a distracted fashion, and even so, this still applies mainly to cell phone use.

Eating While behind the Wheel

A lot of commuters and drivers in the state of California have occasion to wonder whether eating while behind the wheel makes for distracted driving in the legal sense. There is no specific law which labels the activity as such, or even as a criminal offense. Nonetheless, California has set up a general law thereabouts which cracks down on drivers who behave in any way which could cause him or her to lose control of the vehicle, or endanger their own or another’s safety. Even the California Highway Patrol has recently announced plans to come down strongly on drivers, whom they find applying cosmetics, eating while at the wheel, using electronic devices, or doing anything else which could take their attention off the road.

It is not possible for a police officer to stop traffic simply because a driver was enjoying a meal, but it is possible to do the same if the latter were behaving unsafely because of it. California law lets concerned officials ticket drivers whom they find acting in any way that shows disregard for surrounding people’s or properties’ safety, and fines can range anywhere between $145 and $1,000 based on how severe the offense is. The point is that even eating behind the wheel can rack up enough cause for getting pulled over.

A driver who was eating right before getting in an accident with another car or pedestrian, could have the matter raised as proof of his or her negligence, whether in a settlement or in litigation. It is easy enough for the other party to level a claim that the eating driver lacked full control of their vehicle due to an action they chose to pursue, and which resulted in the plaintiff’s personal injury claim or loss.

Distracted Driving in the State of California

As mentioned earlier, there have been many changes to CA law where it regards negligent driving, and the CHP has incorporated many changes to the ways it is cracking down on offenders.